I was in my sixth decade when I discovered that painting was the missing piece of my life and finally threw myself into what I now know I was born to do–create the sort of atmospheric abstractions that have led visitors to my studio to say things like:

“This makes me feel so calm.”

“The color just leaped out to me.”

My early artistic bent, which was for fashion design and bright color, went into hiding after I was soundly denounced at the age of 11 by a college art teacher who gave Saturday classes for kids. She didn’t approve of my reluctance to follow her approach to landcape and still life setups. When we made papier-mâché animals, this little creature (which I found tucked in a box of childhood relics saved by my mother) nearly gave the teacher apoplexy. “What kind of animal is that? Blue and green together? No! No!”

With art no longer to be considered, I got a degree in Literature, taught junior high briefly and disastrously, became a crackerjack secretary/office administrator and
assistant to men with power positions. Then I lucked out of the helper business and into educational publishing as a writer/editor. Now I, the failed teacher, was writing the lesson plans for other teachers. 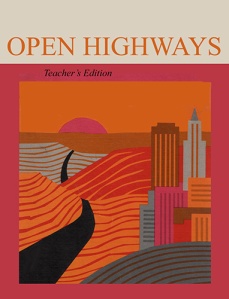 (My first project was working on the Open Highways reading series, the first to acknowledge that not all American children lived in a Dick and Jane world.)

After a few years of this, I took a leap of faith and launched myself as a freelance writer, still doing educational materials, but branching out to include audio-visual materials, films, radio drama, ghostwriting, and more.

It was through one of these freelance jobs that I met and worked on a project directed by Daniel Quinn. Ultimately we joined forces personally and professionally and, with a colleague, formed our own company to produce educational materials. This lasted until Daniel, on the verge of having a solo show with a Chicago gallery, gave up his painting avocation to focus on the writing of a book that would take over our lives for more than twelve years.

During that time we moved from Chicago to Santa Fe and eventually found our way to Madrid (pronounced MAD-rid), a wonderfully crazy former ghost town on the scenic route between Santa Fe and Albuquerque. There we purchased a renovated mining shack, that functioned as living space and quaint shop, selling all kinds of stuff–from nails and hammers to T-shirts and postcards to antiques and collectibles. (I’d always dreamed of having a little shop, but in reality neither of us was cut out to be a shopkeeper!)

My next venture, aided by Daniel even in the midst of his writing, was to start a weekly newspaper. I’d always wanted a newspaper too, from the time I was a kid. I’d hang out playing with bits of old type in the linotype room while my father developed pictures in the darkroom. I’d swivel in my grandfather’s big chair in his publisher’s office, and think: someday I’m going to do this.

Years later, when my father started a weekly paper, I got hands on lessons in small-town paper publishing during college summer vacations by doing all the jobs from writing news to filling mail sacks. Our paper turned out to be a success, which you can read about in one of Daniel’s books, Beyond Civilization.

But village life began to cloy, so we sold the paper and moved to Austin, where once again I lucked into a senior editorial position at a major textbook company. This kept us in groceries until, at last, the book that had dominated our lives for so many years connected with its destiny. Reinvented as a novel and christened Ishmael, it won the largest literary prize ever offered for a single work–in a competition dreamed up by media mogul Ted Turner.

The German edition of Ishmael.

Ishmael now took over our lives completely, what with answering letters from readers, publishing a newsletter, traveling, working on the books that came next, and me there, keeping track of everything in my best secretary/office manager/assistant mode. It was fun and it was important work.

Nevertheless, a few years after we’d moved to Houston in 1997, I realized that what had been gnawing at me through all my varied careers wasn’t dead. My fingers itched to do something besides pushing a pencil, tapping computer keys, and keeping schedules and files in order. I knew it had to do with art. Collage maybe? Back to drawing maybe? Pottery perhaps?

But it wasn’t until I finally pulled out some of Daniel’s battered old brushes and still usable paint and splashed out my first swish of color onto a piece of canvasboard that I knew what I’d been searching for.

All paintings except those in Collections are available for purchase.
All work © Rennie MacKay Quinn
Contact: RMQ@rmqabstracts.com